The rain has stopped.

The temperature has dropped into the 70’s, and a light breeze is chasing away the humidity. It is dusk, and it’s time to walk Cholula.

At the bottom of our stoop, Lula is greeted by Rico, a just-barely-a-puppy from Puerto Rico. They exchange a pleasant wag ‘n’ sniff while his owner and I chat. I mention how much Rico has grown. She says she hasn’t noticed, but it’s probably because she’s around him daily. He is well behaved now, and I’m impressed. I snap a picture. Rico’s mom proudly shows off how well he can “sit” and “stay” on command. Good boy. She adopted him on July 1st. Since then, she and I have run into each other almost daily. We always smile, and occasionally chat. We’ve seen each other without makeup, and in our pajamas. At any given time, either of us is returning from the store, on the phone, or drinking coffee. We’ve watched as firemen put out a neighborhood fire. We’ve seen fights break out. We’ve walked in the rain, and we’ve stood under the street light at 3 am, yawning, patiently waiting for our “kids” to finish up. And yet, I don’t know this woman’s first name. And that doesn’t even seem weird.

We turn and head in opposite directions. I decide to walk all the way around the block, since it is so pleasant.

I head east on 21st Street, and an older man on a bicycle has pulled over to look at his phone for directions. He is delivering someone’s dinner. Classical piano music plays loudly from a tiny speaker attached to his bike and echoes off the buildings in the neighborhood. I stop to enjoy the music until he rides off.

Next we encounter Marcos. A young German Shepherd mix, uncharacteristically off-leash. He is well-behaved. The dogs do a quick exchange, and we are off again. I stop to think how I know more people by the name of their dogs, rather than by their own name. I wonder if that’s by design? We are being social without being truly social. No discussions of politics, religion or the news. We swap dog names and ages, along with (more often than you would think) where the dogs come from. Many have been brought here from overseas. Little fuzzy immigrants. Blissfully trotting down the sidewalks of New York City.

Two young kids in flip flops and swim trunks slip/slap past me. I wonder where they are going.

A group of teenagers laughing and pushing each other are next.

Two men walk toward me and as they pass, one has said something funny to the other in a language I do not recognize. They burst into a fit of laughter. I can’t help but smile and giggle a little, even though I have no idea what was just said.

There are men returning from the gym. Good looking, good smelling men. Lots of them. It’s one of my favorite things about living here. And they are all gay. (You may think, nah, they can’t ALL be gay. But, yes, they really are. And it’s pretty great.) I always pause as they walk by. I take a deep breath… in through the nose, out through the mouth… I’m certain it helps with stress.  Giggle.

The sidewalks get busier as we near 8th Avenue. Only half a block from the apartment, and the vibe is now suddenly different. No longer residential, we pass nail salons, deli’s, flower shops, cleaners, restaurants, and fun stores with rainbow flags and interesting apparel displayed in the window. Passing by the grocery store where I shop, a woman named Wanda recognizes me through the window and waves.  She lives close by, and we had a long conversation one night about lost love. We were both buying ice cream that night, but I think she needed it more than I did.

A street vendor is closing down his fruit stand for the day. Cholula stops to investigate every bag and box. I chat with the vendor. We speak of nothing more than the weather, but his smile lights up the sidewalk that is now getting darker as the sun goes down.

At the corner of 8th Ave and 22nd St, we turn to head west. Diners are enjoying expensive meals at Foragers Table. A delicious, but expensive restaurant. The smell reminds me that I haven’t eaten. Lula picks this moment to leave a doggy deposit within full view of well-dressed people eating pricey chicken. I turn my back to them, and retrieve a doggy bag, waiting for her to finish. I happen to glance up and notice a young couple sitting on the fire escape. Their voices carry easily across the street. They are not arguing, but their conversation is serious. I imagine they are working out the details of their relationship. I want to stand there longer. I want to eavesdrop. I want to know how it ends. I felt my heart whisper, “I hope they make it.”, and suddenly a lump formed in my throat. Time to move on.

We step around a chalkboard announcing “Happy Hour” at the Gem Hotel bar. If Lula wasn’t with me, I would probably pop in.  I make a mental note to pop in later this week.

A few more feet and I am staring up the steps of The Colonial House Inn (a local B&B style hotel I’ve always been curious to see) when Lula comes to an abrupt halt, as she so often does. Ahead of us is a cartoonishly long Beagle. Her young owner laughs and says that Constance (again, I learned the dog’s name, but not his) does the same thing. We take advantage of their stubbornness and chat. Then it’s time again to move on.

Across the street is the German Lutheran Church of St. Paul. I take a quick picture, realizing I’ve seen this church more often in the middle of the night than during the day.
Cholula always stops to greet homeless people. And tonight is no exception. I have no food or money to give, so I simply smile and move along. One man hollers blessings after me as I walk by. They aren’t a threat. They used to be children. What happened to them? I feel bad for not having an apple or a couple dollars with me to give them. 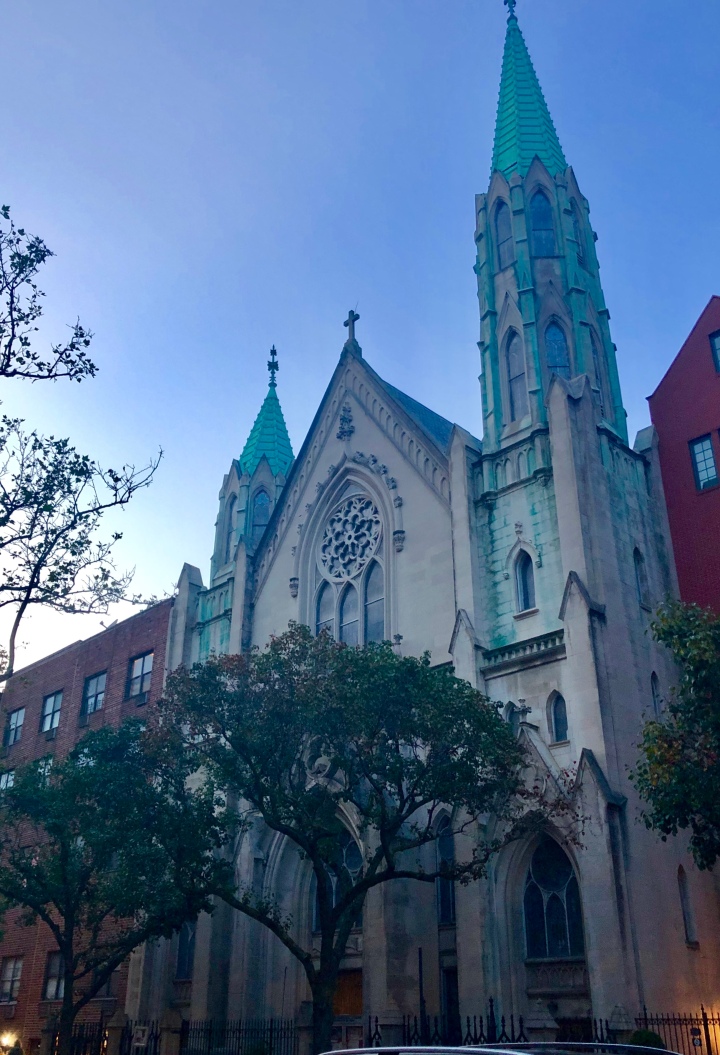 At the end of the block is Rite Aid. The automatic door slides open, and I laugh to myself that the name “automatic door” is more of a description of what happens when we walk by. Lula “automatically” thinks she’s going in. This is not the case tonight, however, and we turn on 9th Avenue and head south. I pass through a cloud of smoke, recognizing the familiar skunky smell. It is more prevalent on these streets than cigarette smoke.

I also pass through no less than 50 conversations. I tried to keep track one time, but I was so distracted by everything else that I “squirreled” my way home and forgot all about counting.

I pass by Pastai, a local Italian restaurant with good food and a great Happy Hour. The bartender, Oscar, knows me.  He sees me through the window and waves. He typically comes out to say hello to Cholula, but tonight he is busy with customers. I will see him another time.

Next door is Billy’s Bakery. My stomach reminds me for the second time in 20 minutes that I haven’t eaten. I gaze in the window and think that it’s a good thing they don’t allow dogs, or things could get ugly. Then I remember that they are open late. Very late. I make a mental note to eat a healthy dinner so I won’t feel so bad about coming back down here (dog-free) before bed.

At the end of 9th Ave, Cholula comes to another full stop. This corner once belonged to Art Lovers Café. For a year, I walked the 52 steps from the apartment to grab a cup of coffee and utilize their comfy chairs, free wifi, and great views to get my writing done. They toggled between offering empanadas (yum!) and crepes (usually yum, but they were HUGE unmanageable things that should never be eaten in public), and their entire store was odd. I imagine it was family-owned and operated, and maybe the mom had the worst ideas, but everyone was scared of her, so they just did all the weird stuff. The coffee wasn’t spectacular, and it was overpriced. So it wasn’t too much of a surprise when I saw the windows covered in paper and a poster announcing a T-shirt shop “coming soon”. The worst part was that the outdoor benches were gone. This was a fabulous place to sit and take a break with Cholula on days when school was letting out. We would people-watch and chat with other dogs/owners, and enjoy the weather.

But tonight was different. The benches were back! And the T-shirt Shop sign was gone! The windows were still papered up, but there was nothing to indicate what was happening inside. I made a quick wish that the coffee shop was re-opening, and promised myself that I would show up more often and buy more stuff, even if it meant consuming a very hot, extra-large, peanut-butter-and-jelly crepe in front of 23 strangers. I would do my part in keeping it open.

On one of these benches sat a family. A dad, holding a bag of food, sat next to two young children.  His wife sat on the opposite end. They were all staring straight ahead, and they looked exhausted. As if they had spent the entire day at Disneyland, and were now waiting for the monorail to magically shuttle them back to their hotel.  Cholula would not be moved. As always, she was certain there would be empanada crumbs and crepe drippings if only she could get in the door. And, bonus, there were people outside eating food on a bench. I would normally have taken this opportunity to chat. Where were they from? What had they done today? Had they seen everything they wanted to?

But I got the impression that they were not interested in conversation. And that maybe they had seen too much. I get it. But I wanted to lean over and whisper in the kids’ ears, “It’s really okay. Come back here as soon as you can. Ditch the grownups. This place is better than Disneyland, you’ll see. The ‘too much’ is what makes it fun.”

We rounded the corner to head the short 52 steps back home. And of course these steps were filled with a few more dogs and their owners, more laughter, more conversations in unknown languages, more delivery men on bikes, and more clouds of smoke.

And I will do this all over again before bed.

8 thoughts on “Around The Block”